SORALUCE once again demonstrates its leadership and technological capabilities with this new development that provides customers with outstanding advantages in machining large-sized components. 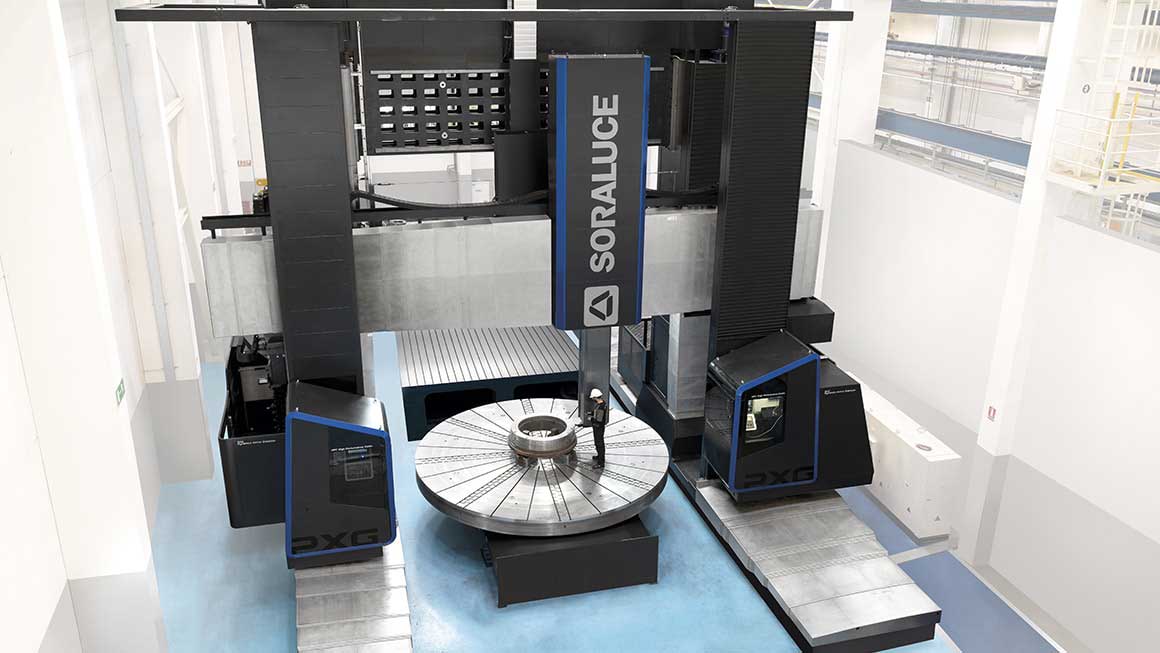 The new SORALUCE PXG-W was presented at the company´s production plant from 30 January to 3 February. In the course of the week, numerous customers were able to visit the assembly and testing facilities and technology centre to see at first hand the technical characteristics of the machine and the advantages and benefits that it can bring them.

Machining large components calls for specific skills and machines capable of guaranteeing the maximum precision, productivity and reliability required to be competitive on the market.

Nowadays, machines for components of this type need to be capable of handling extremely complex machining operations.  The machine needs to meet multitasking and versatility requirements so as to maximise productive time and minimise set-up time.  In that context the new SORALUCE PXG-W gantry-type multitasking milling machine reduces the number of clamps required and minimises cycle times and potential errors. It can also work with centesimal tolerances on large-sized workpieces, even those that weigh hundreds of tons.

The new PXG-W model is the culmination of SORALUCE´s strategy in the large-sized machine-tool segment. It marks the next step in the path begun in 2009, when SORALUCE joined the Hiperion project, promoted by various manufacturers in the Basque Country and funded via the Basque Government´s Etorgai programme.

The SORALUCE PXG-W is characterised by its high capabilities. It has a working volume of 1000 m3 and weighs 500 t.  The dimensions of the model presented are as follows: 19m in length, 7.25m clearance between columns and 7.3m in height. Height is also configurable thanks to the 5m vertical travel of the crossbeam. The SORALUCE PXG-W belongs to the range of large-sized gantry milling machines and completes the top end of the company´s PM, PMG and PRG gantry-type machine range.

This highly versatile model is designed to meet the machining requirements for a range of highly demanding parts used in the construction of machinery for the energy industry, the machining of marine and CHP motors and general machining of large workpieces.

Maximising productivity with the biggest, most versatile multitasking machine

The SORALUCE PXG-W is a completely versatile multitasking solution designed to maximise productivity through its ability to handle milling and turning operations on the same machine. It provides the highest possible return in machining large workpieces with a high degree of technical complexity, and makes it possible to machine a range of shapes and sizes. Its distinguishing feature is its ability to handle different machining processes including turning, milling, boring, drilling and threading with efficiency and precision. To that end, it has several milling and turning heads with automatic tool changing.

The work area is split into two sub-areas. The surface of the main sub-area is for machining prismatic parts. It is equipped with 12x6m floor plates, and has a load capacity of 25 t/m2. The second sub-area comprises a turning table with a hydrostatic mounting, featuring a 6m diameter table with a load capacity of 150 t. The turning head has a power rating of 200 kW and a maximum speed of 50 rpm. This enables it to handle large-scale roughing out operations on large-sized parts from various sectors.

The SORALUCE PXG is fitted with a latest-generation Siemens 840D SL CNC which enables both milling and turning operations to be handled on the same machine, thus reducing the number of set-ups and avoiding difficult transportation and relocation operations when large components are to be machined. It has two operator’s platforms, each with its own control panel, thus enabling the operator to take up the best position for each operation.

The core goal in the design of the SORALUCE PXG-W was to ensure that customers can obtain the maximum precision. The machine therefore features the latest technologies and solutions which are innovative in the large-sized machine segment.

It has been provided with linear guides on the X, Y and Z axes, which provide certain advantages over conventional solutions such as hydrostatic guides.  Linear guiding system avoids the thermal gradients caused by the flow of oil through the structure of the machine, ensuring better geometrical stability and substantially reducing the maintenance required.

The general performance of the machine has been analysed carefully by SORALUCE´s innovation & design teams, which have run multiple simulations to correctly characterise the different deformations caused by the displacement of the moving parts of the system. In the light of the results of these analyses, SORALUCE has created and applied a number of devices that largely offset the deformations caused by the weight of those moving parts. One of these devices is the innovative Vertical Ram Balance system (VRB), patent pending.  The system, which consists of a CNC controlled electromechanical system, patent pending, offsets the rolling caused by the torsion of the cross beam and the differential bending of the columns when the ram travels along the cross (Y) axis of the machine. The system ensures maximum precision in terms of the perpendicularity of the X & Y axes, whatever the working position.

The machine also has a new thermal monitoring system that checks for changes over time in all its structural components via a function built into the CNC. It also has the latest thermal compensation algorithms developed by SORALUCE.

The turning table is fitted with sensors so that a function built into the CNC can be used to help the operator to re-balance the weight of parts with asymmetric geometries.

The structure of the machine is built entirely of cast iron, a material that is much appreciated for its good intrinsic qualities as regards stability and internal damping capability. Of course, the machine also has all the technology developed by SORALUCE to improve its dynamic performance and help increase stability during machining.

This includes the award-winning DAS (Dynamic Active Stabiliser), developed exclusively by SORALUCE, which has won several international awards and is now protected by a European patent.  This system enables a damping effect to be actively incorporated into the structure of the machine, thus increasing its cutting capability by up to 300% and reducing the risk of chatter or instability during machining.

The SORALUCE PXG-W also has other smart systems to help maximise its productivity, such as Adaptive Control, which continuously adjusts the machine´s feed rate in line with power consumption to adapt it to tool capacity and process circumstances. It also features the SSV system, which helps avoid the regenerative effect caused by certain chatter conditions during the process. This is particularly effective during large-scale boring and turning operations.

The equipment built into the SORALUCE PXG covers a wide range of circumstances. It has seven milling heads for different geometries and power settings, which in some units can be as high as 81 kW. This variety makes the machine highly flexible and enables it to machine a wide range of different parts however difficult and inaccessible the areas to be machined may be. All heads are manufactured by SORALUCE, which guarantees the highest assurances in terms of service.

The machine is also fitted with a magazine with 3 turning accessories which enable it to work with automatic or manual Capto C8 and prismatic tool clamping. Tool changes can be made automatically over the whole 5m travel. In this case the capacity of the on-board magazine is 180 tools.

In spite of its complexity, the machine is easy to operate thanks to the kinematics on the heads and accessories integrated into the CNC. This means that the geometries of these elements can be compensated for and the working axes can be oriented automatically, thus facilitating and improving the operator handling experience.

The SORALUCE PXG-W machine also includes technological features that fall within the concept of Industry 4.0: specifically a full monitoring package based on cloud computing.

It incorporates utilities such as a real-time machine status display with relevant information on the status of the ongoing machining program, e-mail messaging in case of problems, the production of reports on sensitive issues for users such as production and processes, such as energy consumption and performance during machining cycles, and diagnostics for key signals for the maintenance of the equipment. This is all done via secure connections routed through a PC or mobile device (smartphone or tablet) by accessing a single website online.

SORALUCE is a European firm with broad experience, renowned among its customers for its standards of service and reliability and for the high performance, flexibility and advanced technology of its solutions, which are always designed to improve efficiency and productivity. This is evidenced by the fact that it has sold over 2500 machines, almost half of them in the highly-demanding German market, where the years have shown that 80% of customers have subsequently purchased further SORALUCE machines.  The new SORALUCE PXG-W is a clear example of the firm´s commitment to the success of its customers, with whom it works closely throughout the useful lifetimes of its machines.

SORALUCE is part of the DANOBATGROUP, the machine-tool division of the  MONDRAGON Corporation, one of Europe´s most important business groups. With nearly twenty first-rate manufacturing plants in Spain, Germany, the United Kingdom and the USA, it also has its own R&D centre where 120 engineers and 24 PhDs work. DANOBATGROUP meets the needs of its customers with one of the most competitive and comprehensive multi-technological ranges on the market. With a workforce of 1,300 people, it posted a turnover of around EUR 269 million in 2015, which has led to its high level of investment in R&D&I, which accounts for 8% of its turnovers.